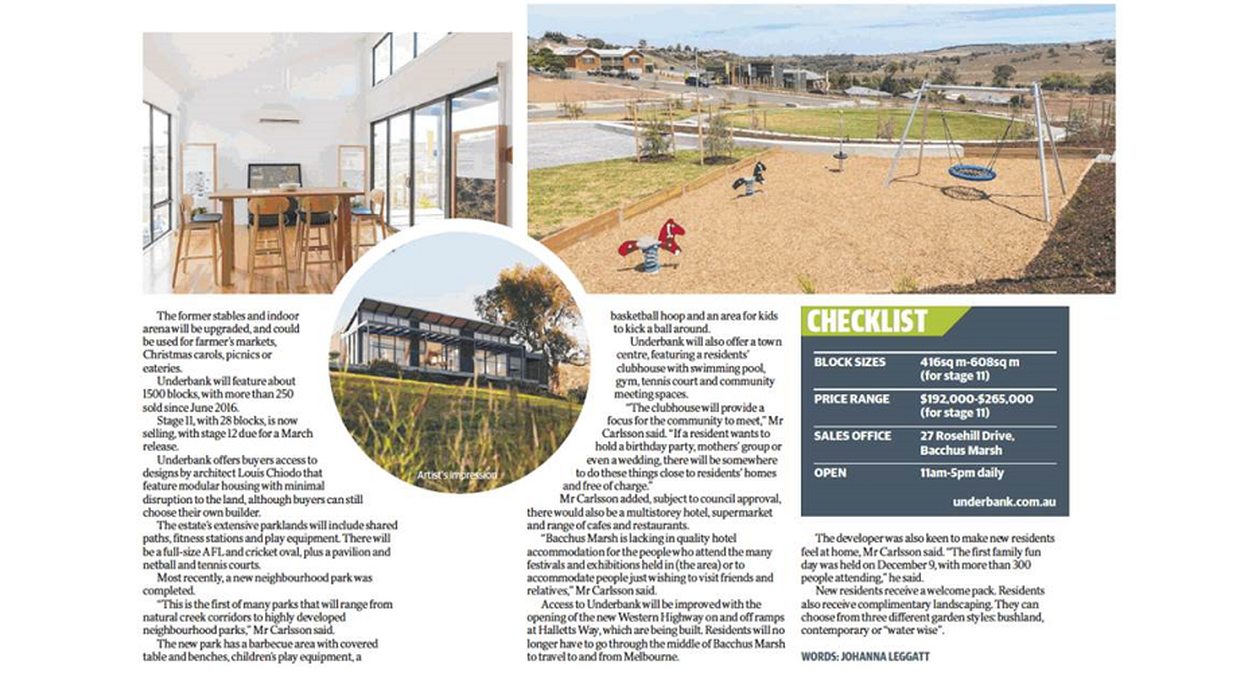 New estates are often built on land with a long past, whether it's old farming country that has been in the one family since the 19th century or a diverse natural landscape of old red gums that are hundreds of years old.

In the case of Underbank, it's a prestigious racehorse history that is the estate's talking point.

Underbank is in Bacchus Marsh, about 55km northwest of Melboourne. It is built on the site of a fabled former stud farm where racehorses were spelled.

It's also where legendary racehorse Phar Lap was stabled when he won the Melbourne Cup in 1930and again before he departed for the US.

"We have retained the (stud's) name, Underbank, and have included a room with photos and a written history in the sales and information centre." said Mr Carlsson, adding more historical details would be available in a new clubhouse at the site.

The developers are considering a sculpture of Phar Lap, or another type of memorial, under the tree where he posed for a painting that now hangs in the National Gallery of Victoria.

"This tree is still there and is thought to predate white settlement in Australia," Mr Carlsson said.

The former stables and indoor arena will be upgraded, and could be used for farmer's markets, Christmas carols, picnics or eateries.

Underbank offers buyers access to designs by architect Louis Chiodo that feature modular housing with minimal disruption to the land, although buyers can still choose their own builder.

The estate's extensive parklands will include shared paths, fitness stations and play equipment. There will be a full-size AFL and cricket oval, plus a pavilion and netball and tennis courts.

Most recently, a new neighbourhood park was completed.

"This is the first of many parks that will range from natural creek corridors to highly developed neighbourhood parks," Mr Carlsson said.

The new park has a barbecue area with covered table and benches, children's play equipment, a basketball hoop and an area for kids to kick a ball around.

"The clubhouse will provide a focus for the community to meet," Mr Carlsson said. "If a resident wants to hold a birthday party, mothers' group or even a wedding, there will be somewhere to do these things close to residents' homes and free of charge."

Mr Carlsson added, subject to council approval, there would also be a multistorey hotel, supermarket and range of cafes and restaurants.

"Bacchus Marsh is lacking in quality hotel accommodation for the people whol attend the many festivals and exhibitions held in (the area) or to accommodate people just wishing to visit friends and relatives," Mr Carlsson said.

Access to Underbank will be improved with the opening of the new Western Highway on and off ramps at Halletts Way, which are being built. Residents will no longer have to go through the middle of Bacchus Marsh to travel to and from Melbourne.

The developer was also keen to make new residents feel at home, Mr Carlsson said. "The first family fun day was held on December 9, with more than 300 people attending," he said.